Named for a nearby creek, the town of Stillwater was settled by pioneers after the opening of the Unassigned Lands in Oklahoma Territory on April 22, 1889. Three men who held claims in the area, Robert A. Lowry, David Husband, and Sanford Duncan, each donated portions of their lands to meet the requirements for a townsite. The post office was established on May 28, 1889, and the population quickly grew to 600. By August there were 80 buildings erected on Main Street that housed many of Stillwater’s earliest businesses, including its first newspapers.

One of the town’s early newspapers was the Payne County Republican, which began publishing in September 1892. It was printed each Thursday with four pages of local and regional news and advertising. The June 8, 1893, issue listed S. A. Reese as editor and publisher, but by the next issue on June 15, Reese was replaced by Dan W. Murphy and his son, Julian B. Murphy. The elder Murphy had founded the Stillwater Gazette in 1889. The paper was Republican in politics and was printed by the Republican Publishing Company.

By September 1893, the Payne County Republican had been renamed the Payne County Populist and was owned and operated by Al D. Krebs and R. Y. Kirkpatrick. They printed four pages every Thursday as the organ for the People’s Party in Stillwater. By November the publication day had changed to Friday with Krebs serving as publisher and V. H. Biddison as editor. In December, Leroy E. Walker replaced Krebs as publisher and would continue with the paper at least through April 1895.

On September 1, 1899, brothers C. W. and F. W. Wright purchased the Payne County Populist and began printing on Thursdays with eight pages. On January 3, 1901, they decided to change the name of their newspaper to the Stillwater Advance because “to display the politics of a newspaper in its headline is not good taste.” The Wrights continued to support the Populist Party but hoped to gain a wider readership with the new name. The Advance soon became the official city and county newspaper for Stillwater and Payne County. In August 1901, the paper came under the control of business manager William J. Vandiver and editor John S. Hale, who endeavored to promote Stillwater in every way. They supported the People’s Party and advocated for the unification of Oklahoma and Indian Territories into a single state. In June 1903, the Stillwater Advance reported a circulation of 2,146, but two months later that number was 2,616. By the following March it was 2,900.

The Stillwater Democrat started publishing as early as November 1900. Irvin Owings Diggs, who had just moved to Oklahoma Territory earlier that year, was the editor and publisher. The paper supported the Democratic and Populist Parties and was printed weekly on Thursdays with eight pages. It also stated that the paper was the successor to the State Sentinel, but there is no evidence to support this claim. Beginning July 4, 1901, the masthead proudly proclaimed that the Democrat was the official city paper and that it printed all the official county news.

On Monday, September 29, 1902, Diggs distributed the first issue of the Daily Democrat, which was printed each evening except Sunday with four pages. From April 27 through May 2, 1903, the Daily Democrat temporarily came under new management by the local Woman’s Christian Temperance Union (WCTU). The April 25 issue exclaimed in the masthead: “Ladies Will Be In Charge – And the Daily Democrat next week will be ‘As The Women Run It.’” The WCTU filled the newspaper over the following days with the proceedings of their county convention and used it to call attention to their mission of abstinence from alcohol and to fund raise for their social programs. On May 4, the masthead proclaimed the Daily Democrat to be Stillwater’s official city paper, and five months later in October, the printing plants for the Democrat and the Stillwater Advance were consolidated under the Advance Printing and Publishing Company with Irvin Diggs at the helm. In February 1904, John Hale of the Advance began working as editor of the Democrat but was replaced by Freeman Miller in May. The Daily Democrat continued to print at least through July 1906 while the weekly Stillwater Democrat merged with the Stillwater Advance to create the Advance-Democrat on September 7, 1905.

The consolidated Advance-Democrat was published as the weekly edition of the Daily Democrat and was distributed on Thursdays. Irvin Diggs continued to serve as the business manager of the Publishing Company, and Freeman Miller worked as the editor until February 1906, when he left to work for the People’s Progress. In January 1918, Diggs transferred management of the Advance-Democrat to Forrest Thomas while Diggs retained majority control of the publishing company. The paper then went through a succession of publishers/editors in a short period of time. Thomas lasted just eight months before J. L. Tullis took over in August 1918; Jesse W. Hoke replaced Tullis the following June only to be replaced himself three months later by G. R. Gould, father of Chester Gould, the creator of the Dick Tracy comic strip. The January 12, 1922, issue once again listed Jesse Hoke, along with Paul A. Wintersteen, as owner and publisher. In June 1924, B. H. Hester, formerly of the Chelsea Reporter, was serving as editor and publisher. But less than one year later, the Advance-Democrat had new proprietors and a new title.

On March 5, 1925, new owners Arthur S. McEwen and Edmund E. Hadley changed the name of the Advance-Democrat back to one of its original titles: the Stillwater Democrat. However, three years later in October 1928, the paper’s named changed again to the Payne County News, and the publishing company was renamed the Stillwater Publishing Company. The sole stockholders were Arthur McEwen, president, W. E. Carlson, vice-president, and Madeline C. McEwen, secretary-treasurer. The reason given for the new title was that the paper covered the news of the entire county, therefore it was necessary to incorporate the county into its name. The new Payne County News printed twice weekly on Tuesdays and Fridays and was strictly independent and interested only in the growth of Stillwater and Payne County. But less than one year later in June 1929, McEwen and Carlson sold the paper and its printing company to Willis F. Allen. Allen had previously been the owner and editor of the Vinita Daily Chieftain, and he brought on his son-in-law, L.W. Evans, formerly of the Dewey Globe, to act as business manager. Two months later in August, publication of the News was reduced to weekly on Fridays. During his tenure with the Stillwater Publishing Company, Allen began the Stillwater News, which printed thrice weekly on Sundays, Tuesdays, and Thursdays.

In July 1940, Allen retired and sold the company and its two publications to E. E. Johnson and Irvin Hurst. Johnson’s background included experience working at the Oklahoma Publishing Company in Oklahoma City, along with the Blackwell Journal and the Cushing Citizen. Hurst had previously worked for the Oklahoma City Times and the Daily Oklahoman and resigned as secretary of the state highway commission to join Johnson in Stillwater.

In March 1941 Johnson and Hurst sold the Stillwater Publishing Company and its two publications to C. Robert Bellatti and his son R. Marsden Bellatti. The elder Bellatti moved his family to Blackwell in 1912 where he practiced law until he purchased the Blackwell Morning Tribune, which he built into a prosperous newspaper with a circulation of more than 14,000. He served as president of the Blackwell Chamber of Commerce and was on the state coordinating board during Governor William H. Murray’s administration. The Bellattis continued to print the Payne County News at least through November 1941. By October 1941, the Stillwater News was printing daily as the Stillwater Daily News, and on November 10, the News was consolidated with the Stillwater Daily Press to form the Stillwater Daily News-Press. The Daily Press and its weekly publication, the Stillwater Gazette were sold to the Bellattis by John P. Hinkel and his sons, John W. and William S. The Stillwater News-Press quickly became the city’s official newspaper, and it has provided Stillwater and Payne County with local and national news ever since. 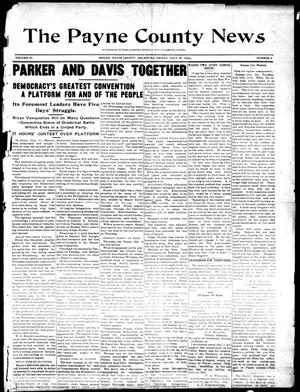 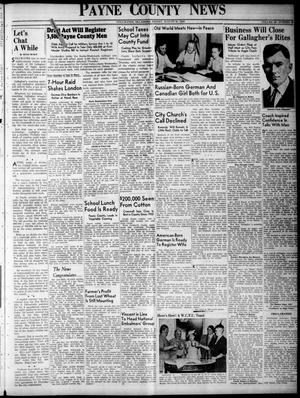 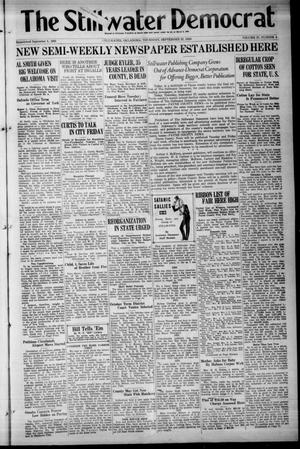 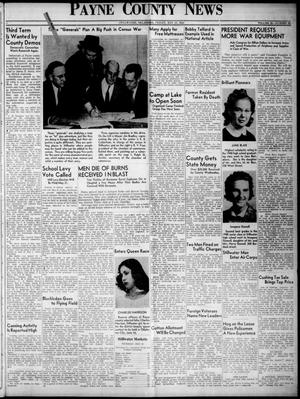 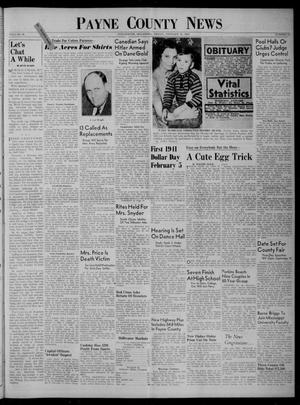 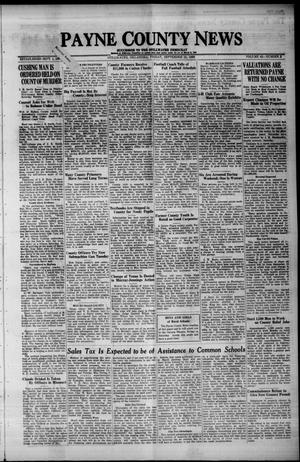 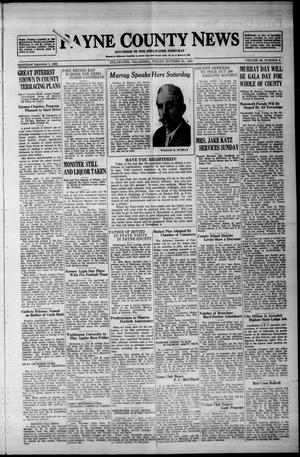 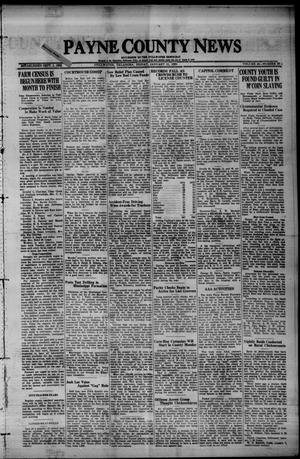 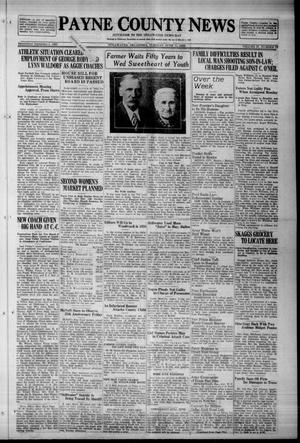 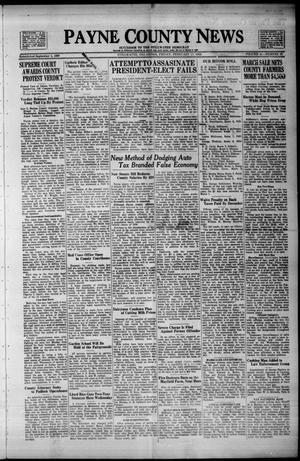 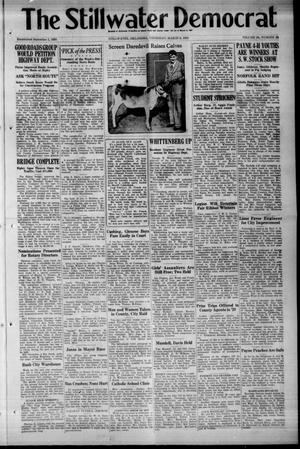