Named for Osage chief Pawhuiskah, meaning White Hair, Pawhuska was established in 1872 in the midst of Osage tribal lands in Indian Territory. Besides historical dependence on farming and ranching, its economy was most notably built on oil, especially the Osage oil boom of the 1910s and 20s. At its height in the 1920s Pawhuska had around 8,000 residents.

One of Pawhuska’s earliest newspapers was the Osage County News, published from October 31, 1919, through October 31, 1958. The Osage County News, however, had its roots in two local papers, the Avant Hustler and the Osage County Hustler, both published in the town of Avant. As Avant grew with the discovery of oil in 1904 and the coming of the railroad in 1905, A. E. Howell as "Editor, Managing Editor, Business Manager, Publisher, and Owner" began the Avant Hustler with its motto "In the Interest of Avant and Surrounding Community". Published every Friday from July 25, 1913, through May 25, 1917, with a decided emphasis on a Democratic point of view, the Avant Hustler covered local, state, and national news (including stories about World War I and labor issues), advertising, public notices, serial novels, and even unclaimed letters at the post office.

Soon after the demise of the Osage County Hustler in 1919, Charles E. Prentice and Fred Whiting published the first issue of the Osage County News on October 31, 1919. By purchasing the subscription list and legal status of the Osage County Hustler, they made the News a legal publication from its start. As well, they continued the numbering sequence of its predecessor, and used the motto "Combined with the Avant Hustler and the Osage County Hustler". However, unlike the Democratic point of view of the Hustler, the News stated that with the sale of the Pawhuska Weekly Capital to Richard Elam, a "died in the wool" Democrat, the Republicans of Osage County "demanded a Republican paper". It, then, promoted its Republican position openly, as can be seen in some of its mottos throughout the years, such as "a Republican organ supporting Republican principles" and "Republican in principle, but Progressive in spirit and published in the interest of Pawhuska and Osage County". Although its outright claim of Republican ideals softened over the years, Prentice maintained the paper's Republican point of view throughout its publication. The News printed local, state, and national news (including coverage of the trial of William K. Hale in the Osage Indian murders in February 1929), oil field news, advertising, legal notices, serial stories, comics, and family and education stories.

As to its leadership, the News was quite stable. At about the same time that Prentice (age 28) and Whiting (age 20) began the News, they also started the Shidler Derrick as the oil boom grew in Shidler. Although the Derrick did not survive long, the News was long-lived, being published every Friday until October 31, 1958, and under Prentice's strong leadership for its entire life. On March 27, 1925, Whiting sold his interest to Prentice under "pleasant circumstances" as Whiting was considering starting a new business in Pawhuska. Soon afterwards in 1930 as he helmed the News alone, Prentice began the Pawhuska Daily News which was published daily, except Mondays, from June 15-July 27, 1930. Prentice published the Daily News with Charles Brown as city editor and Lucile Mason as local and society editor. Its motto was "An Independent Morning Newspaper, Progressive in Spirit and Published in the Interest of Pawhuska and Osage County", and it covered much of the same types of news with a focus on local and state news, society news, and advertising.

On September 6, 1958, Prentice died after cataract surgery and the front-page of the September 12th edition carried a tribute to him written by his original partner, Fred Whiting. Whiting noted Prentice as a "true family man" and a Christian who cared about bettering Pawhuska and Osage County. Prentice continued to be listed as the publisher of the News for the next several weeks, during which time his wife advertised the paper as being for sale on September 19th and ran the paper herself until its sale at the end of October. On October 31, 1958, the front-page announced that Mrs. Prentice had sold the News to the Osage Newspaper Company of Pawhuska, publishers of the Osage Journal, which was owned by Glen R. Van Dyke and S.J. Love.

From 1901 through 1903, there were several significant incidents involving the Journal which impacted its publication. Upon his return in 1902, Timmons wrote that he has “pleasant memories" of [his] past experience at the Journal, yet he noted that forms had been "pied [printed type jumbled up] by an irate Indian Agent; the doors locked and the windows darkened by United States marshals; a change of editors every new moon”. In July he was accused of being anti-Christian in an anonymous letter to the editor to which he wrote a lengthy response that he was not. In October 1902 under Peter's leadership, the Journal cut the length of the paper to 6 pages until they could afford to buy another press. That same month, on October 16, the Journal posted a public notice of the dissolution of the law partnership of Leahy and Timmons, with Leahy taking care of all matters to do with the firm which seemingly tied to some of the editor changes and to Leahy's stepping away from the paper in 1902. The final incident, causing the paper suspend publication from July 1903 to December 3, 1904, was the burning of the building in which it was published.

On December 10, 1904, the Osage Publishing Company took over the Journal, purchasing the franchise and equipment from Peters. It noted “Schools and churches will occupy no inconsiderable space in these columns. Politically, the paper will be Democratic on national issues. It will not be rabid or radical ...none need be in doubt about our position.” By June 1908 its circulation increased to 2,000. From June 29, 1906, through August 6, 1925, J. A. Knight was manager with E. L. Gay as editor. Gay, who had published other papers such as the Tribune in Beaver City, the Oklahoma Democrat in El Reno, and the Evening News in Shawnee, had helped with the settling of territories across northwestern and north central parts of the state, even serving as Deputy US Marshal in the No Man’s Land of Indian Territory. Gay remained editor through Nov 5, 1925, while the Journal gained Richard Elam as publisher. By August 1943, the Journal was owned by the Osage Newspaper Company, Inc. with Rowland Blanc as publisher.

Throughout its over 40 years of publication, the Journal had many mottos, including “Allotment, Progression and Individualization”, “Build for Permanence by Building a Permanent Foundation”, “Pawhuska, the Heart of the Great Osage Oil Fields, the Home of the Pure-Bred”. The paper offered local, state, national, and international news, advertising, political news with a Democratic point of view (E. L. Gay served as a delegate to the Democratic National Convention in 1924), society news, weather, sports, legal notices, marriage licenses, war news, oil field news, women in politics, and bribery of public officials. It also covered long-term news stories about the process of achieving statehood (eventually adding a section called “News of the Embryo—State? States?”), the impeachment of Governor Walton in 1923, the Scopes Trial in 1925, and the Osage murders throughout the 1920s.

In 1958 the Journal merged with the Osage County News to form the Osage Journal and the Osage County News. The consolidated paper was published by the Osage Newspaper Company every Friday from November 21, 1958 through May 1, 1959, beginning with Volume 59, Number 47, following the numbering sequence of the Osage Journal. During its short life it was led by Glen Van Dyke as publisher and general manager, Jack Love as production manager, Frank Spencer as managing editor, and Jesse Dixon as business manager. Its contents, more streamlined than most of its predecessors, offered state and local news, advertising, society news, weather, sports, legal notices, and obituaries.

By the 1980s the Donrey Media Group, which owned several media outlets across the US, was owner of the Journal-News with the Western Publishing Company in charge of publication. Its contents focused on state and local news although it would periodically offer national and international stories), advertising, society news, and legal notices. The Journal-News was published weekly on Fridays until it ceased publication in October 1988.

Extus Leroy Gay came to Pawhuska in 1904 and became the editor for the Journal; he originally edited newspapers for Beaver City, El Reno and Shawnee. When Mr. Gay arrived in Pawhuska the town had no brick buildings or sidewalks and he used his influence of the paper to help advance the settlement into a full functioning establishment. Gay and his business manager, John Knight, worked together to develop the paper for twenty-one years. Their first prints of the Journal had eight pages with six columns and increased to seven when business improved and measured at 13 by 20 inches with subscriptions costing $1.00 per year. 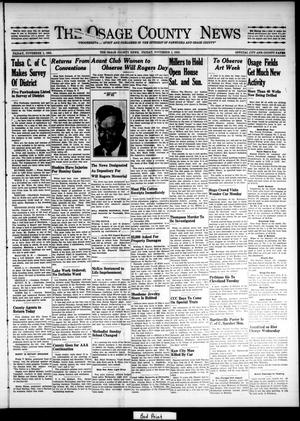 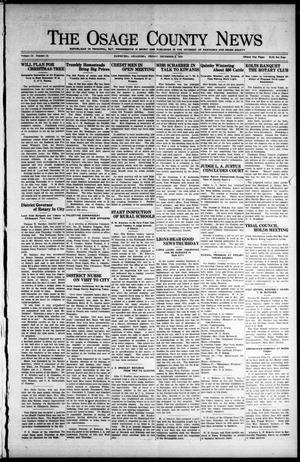 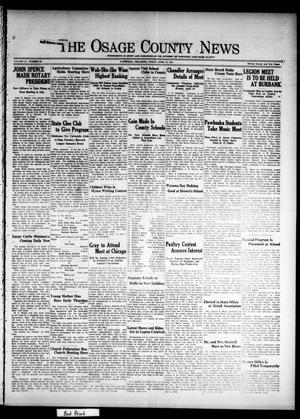 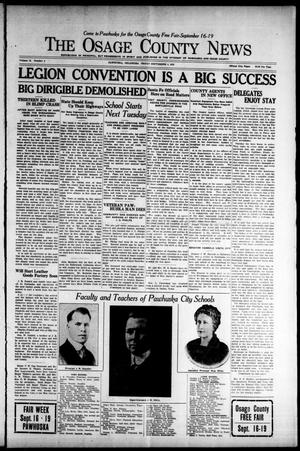 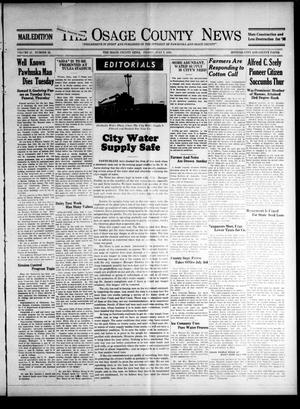 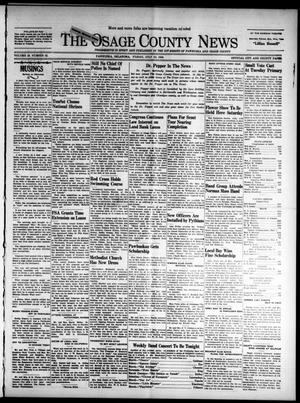 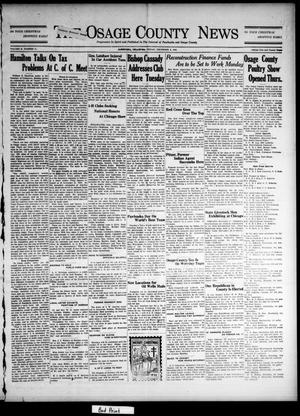 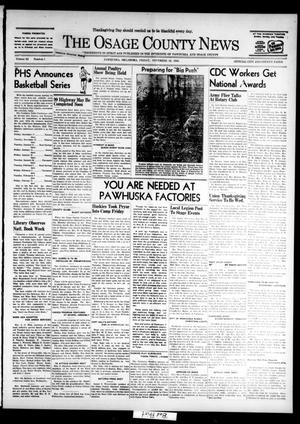 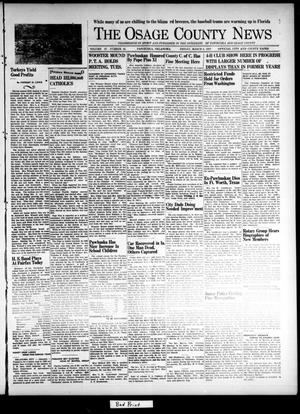 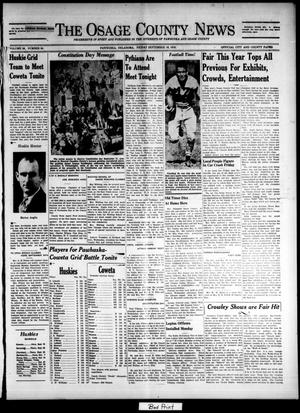 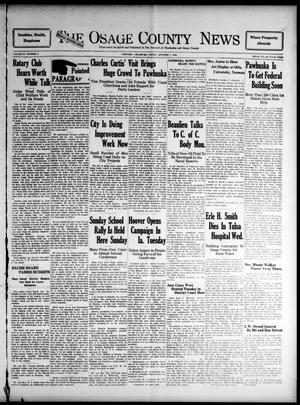 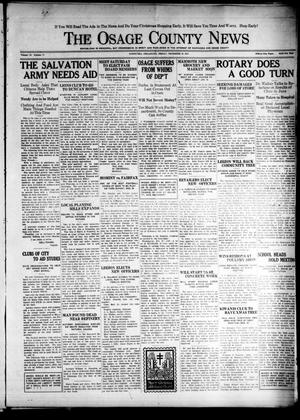