The town of Bluejacket can trace its roots back to 1871 when the Missouri, Kansas and Texas Railway built Bluejacket Station as tracks were laid south through the Cherokee Nation from the Kansas border toward Texas. A post office was established in 1882 with Eastern Shawnee Chief Charles Bluejacket serving as the first postmaster, and the town was officially incorporated in 1894. Agriculture served as the foundation for the area’s economy, but other early businesses included a broom factory, a grain elevator, two banks, and a newspaper called the Bluejacket News.

The first issue of the Bluejacket News appeared on December 12, 1902. In December 1904, W. S. Maloney was working as editor, and the paper was being printed weekly on Fridays with four pages of local news and advertising. The News supported Republican politicians and offered coverage from Washington, D. C. on news concerning Oklahoma and Indian Territories and the possibility of statehood. In the March 10, 1905, issue, it was announced that Maloney sold the News to C. J. Howell, who edited the paper for the next five years. Howell was a great promoter of Bluejacket, using his newspaper to campaign for the town to be chosen as the seat of Craig County, as well as launching a fundraiser to erect a monument to the town’s namesake, Chief Charles Bluejacket.

The last issue of the Bluejacket News was printed on November 12, 1909. Its successor, the Craig County Weekly Gazette, was published the next week with C. J. Howell serving as editor. The Weekly Gazette also continued the volume and issue numbering sequence of the News. Its motto was “We Print to Please; We Please to Print.” In March 1910, ownership of the paper changed hands, and Scott Thompson became the editor. Howell would later become the editor of the Welch Watchman. Publication of the Weekly Gazette was moved to Thursday, but Thompson did not stay with the paper long; in August he moved to Kansas and established the Bartlett Breeze. On August 11, 1910, Prentice M. Henley became the paper’s proprietor, but on September 23, T. J. Byard was listed as the publisher, and publication was moved back to Fridays. Byard printed the Weekly Gazette at least through March 1911, but by August 24, Emmett A. Henley had become owner and editor.

On June 6, 1912, the Craig County Weekly Gazette became the Bluejacket Gazette. Emmett Henley edited the paper for the next three months until September 5, when Fred F. Mayfield took his place. Mayfield stayed on until February 1913, at which time Prentice Henley returned to the helm. Four months later in June, ownership transferred again to Emmett Henley, but only for three months; Prentice Henley was once again listed as editor beginning September 25, 1913. In February 1914, Fannie M. Ritchie became editor and publisher, and in May Prentice Henley was yet again associated with the Gazette, this time as associate editor. Arnole V. Henley was listed as editor with Monnie Spangler as publisher. Just four weeks later, Emmett Henley was again listed as sole editor and publisher, and he stayed with the paper until September when publication was temporarily suspended. In the February 4, 1915, issue, new owner Scott Thompson explained the previous owner no longer wished to print the paper but was not able to find another interested party until Thompson purchased type, machinery, and subscription list. Thompson published the Gazette every Thursday as a strictly independent newspaper until March 29, 1917. Beginning in April, May Farmer took over the paper and printed four pages of independent local news and advertising through September 30, 1920, when it became the Craig County Gazette.

On October 7, 1920, the first issue of the Craig County Gazette was printed by P. B. Vandament, May Farmer, and H. Merle Woods. Vandament also worked for the Welch Watchman, and Woods left the El Reno American to join the Gazette. The paper was increased to eight pages, and was moved to the county seat of Vinita to provide better coverage for the entirety of Craig County. Woods decided to return to El Reno in February 1921 and was replaced by Scott Thompson, who had been working with the King Jack in Commerce, Oklahoma. However, beginning with the August 25 issue, Farmer and Thompson were dropped from the publisher’s block and Vandament remained as sole publisher. Vandament’s Craig County Gazette was full of local news with several regular articles devoted to the surrounding towns, including Bluejacket, Welch, Cleora, Big Cabin, and White Oak. In November 1922, John B. Scudder joined Vandament as part-owner, having previously worked for the Southwest American in Fort Smith, Arkansas. Throughout 1923, the Gazette boasted that it had the “largest paid in advance circulation in Northeastern Oklahoma.”

In October 1923, Vandament and Scudder sold their newspaper to J. R. Carselowey of Adair, Oklahoma. In his first issue on October 11, Carselowey stated the Gazette would be a democratic publication, but not radical, and he promised to remain unbiased in the fight that was raging between Oklahoma Governor Jack C. Walton and the Ku Klux Klan. However, Carselowey did not stay with the Gazette for long, selling back to P. B. Vandament in December. Vandament provided the paper with some much needed stability and remained in control until April 1929, when he sold to Gould Moore and Charles Frye of Sallisaw. Moore and Frye also purchased the weekly Vinita Leader and the Vinita Daily Journal and published all three newspapers for a time. They established a first class printing plant, Moore-Frye, Inc., with the Gazette’s existing equipment plus an additional $12,000 in upgrades to the press and types. The paper once again became politically independent, and was printed on Thursdays but would only continue for another three months. The last issue of the Craig County Gazette came out on June 27, 1929, after which it was consolidated with the Vinita Leader.

In June 1923, the Craig County Gazette purchased the Centralia Register from George Armstrong, and on June 28 it became a supplement to the Gazette while retaining its own volume and issue numbers. However, the issue numbers were dropped in January 1925, and on December 29, 1927, the supplement was condensed to a half-page article recounting the news from Centralia.

On November 1, 1923, the town of Ketchum received its own supplement to the Craig County Gazette called the Ketchum News. The first editor was Corbett Thompson, but he was soon replaced by the Collins Sisters on November 8. In February 1924, issue numbers were dropped from the masthead, and the Collins Sisters were no longer listed as editors. The volume number was dropped in April 1925, though it never went passed Volume 1. On December 16, 1926, the Ketchum News was condensed to a half page article.

The title Bluejacket News was revived on January 10, 1924, when the Craig County Gazette gave the town a separate supplement. The News had its own volume and issue numbers, but the later was abandoned in February 1924, while the volume number was listed until December 1925. On December 29, 1927, the supplement was condensed to a recurring half-page article. 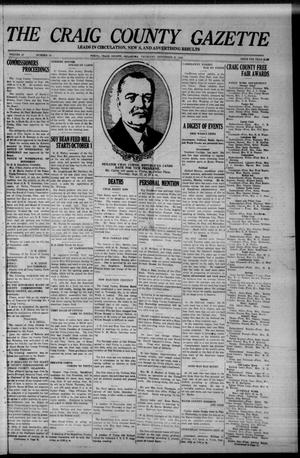 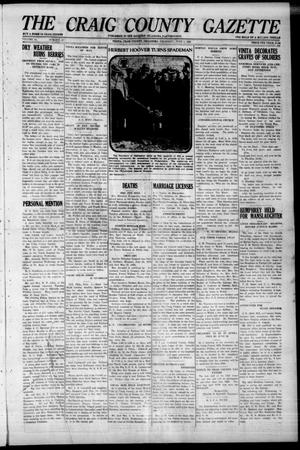 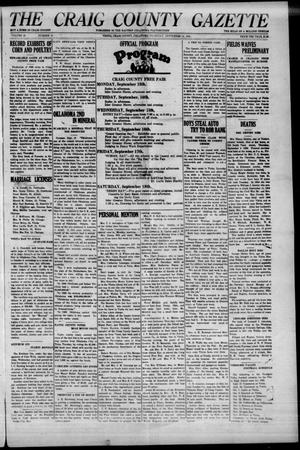 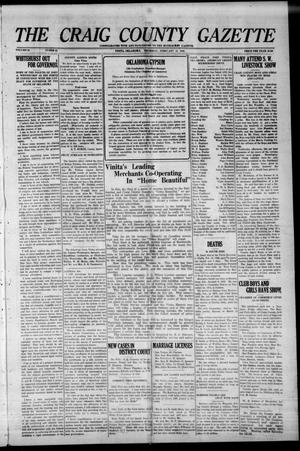 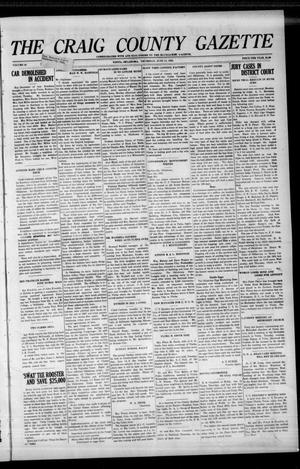 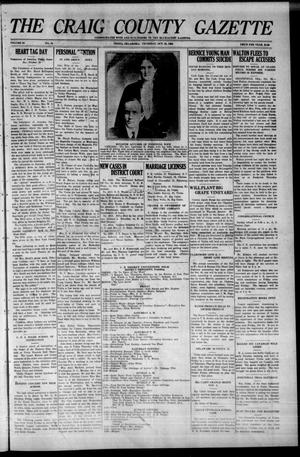 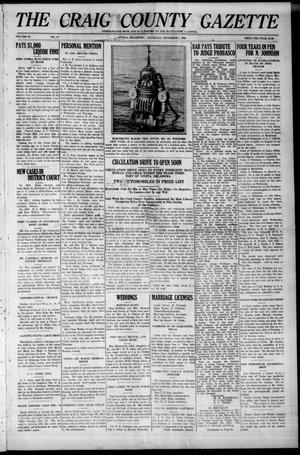 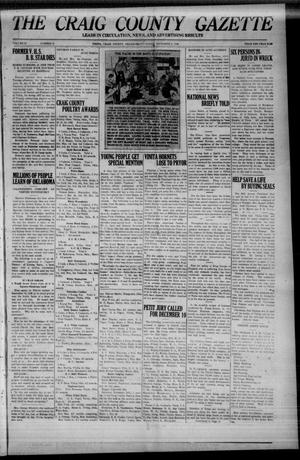 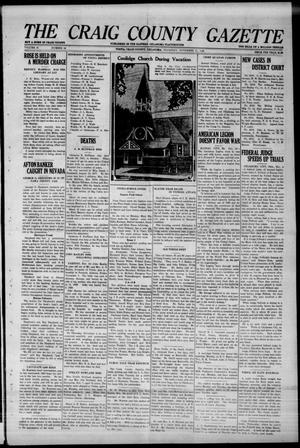 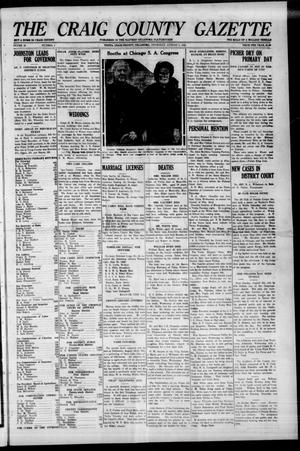 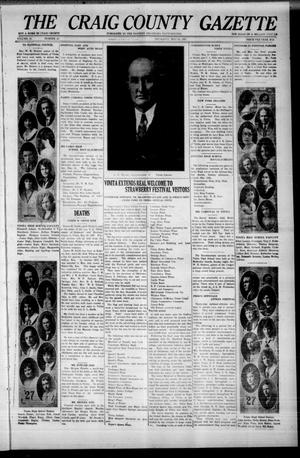