One of 3 photographs in the series: C. B. Rhodes Collection available on this site. 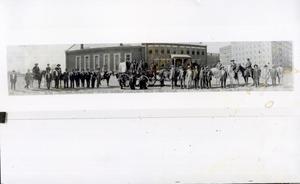 People and organizations associated with either the creation of this photograph or its content.

The mission of the Oklahoma Historical Society (OHS) is to collect, preserve, and share the history and culture of the state of Oklahoma and its people. The OHS was founded on May 27, 1893, by members of the Territorial Press Association.

Descriptive information to help identify this photograph. Follow the links below to find similar items on the Gateway.

Unique identifying numbers for this photograph in the Gateway or other systems.

This photograph is part of the following collection of related materials.

These photographs document individual portraits, street scenes, and pictures of landmarks and buildings taken between 1890 and 1920 across the state of Oklahoma.

What responsibilities do I have when using this photograph?

Dates and time periods associated with this photograph.

When was this photograph last used?

Geographical information about where this photograph originated or about its content.

Interact With This Photograph