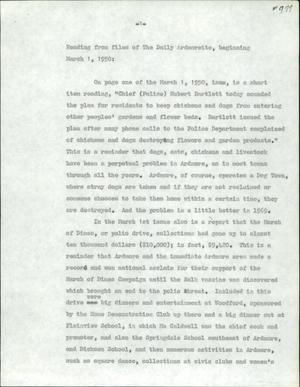 This text is part of the collection entitled: William A. McGalliard Historical Collection and was provided by the Ardmore Public Library to The Gateway to Oklahoma History, a digital repository hosted by the UNT Libraries. More information about this text can be viewed below.

People and organizations associated with either the creation of this text or its content.

Descriptive information to help identify this text. Follow the links below to find similar items on the Gateway.

Unique identifying numbers for this text in the Gateway or other systems.

This text is part of the following collection of related materials.

Photographs and documents related to William A. McGalliard, photographer, author, reporter, and historian.

What responsibilities do I have when using this text?

Dates and time periods associated with this text.

When was this text last used?

Interact With This Text

Overview Who What When